With the implementation and promotion of the new version of GMP, the corresponding requirements for the production of sterile drugs have also been increased.

With the implementation and promotion of the new version of GMP, the corresponding requirements for the production of sterile drugs have also been increased. Sterilization has always been the key link of sterile products. In order to improve the quality of products, it is necessary to choose the appropriate sterilization method. especially important. 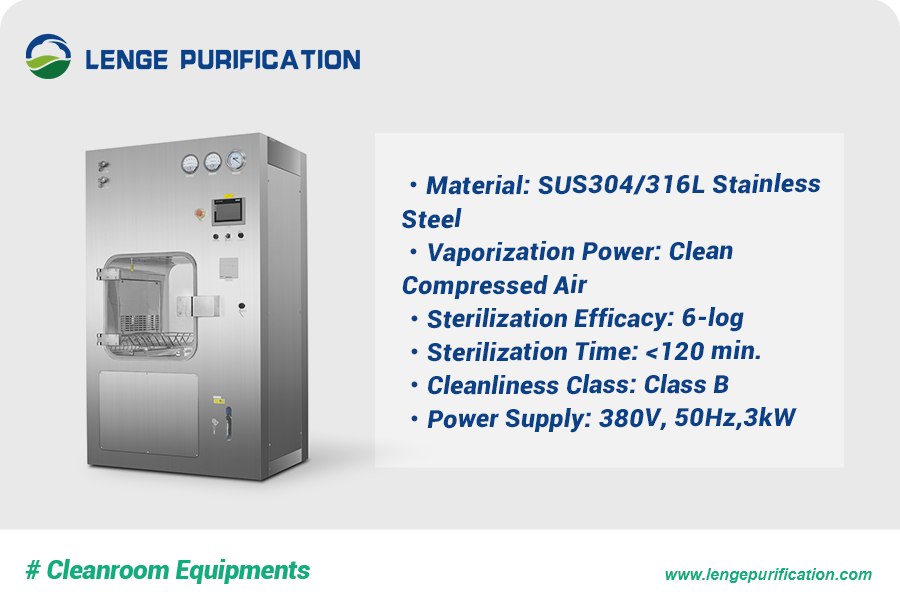 Hydrogen peroxide has a bactericidal effect due to its redox effect, especially for anaerobic bacillus. The principle of action of hydrogen peroxide is to dissociate highly active hydroxyl groups through complex chemical reactions, which are used to attack the components of cells, including damage to cell membranes, lipids, proteins, and DNA.

(1) Conditioning preparation: It takes about 5-10 minutes to stabilize the evaporator of the hydrogen peroxide generator at a temperature of about 120°C to 130°C.

(2) Gassing air intake: use readily available pharmaceutical-grade 30%~35% w/w hydrogen peroxide solution, which is instantly evaporated (flash) in the generator and then dynamically sprayed into the target area. The nozzle is used to increase the steam flow rate to nearly 30.48 m/s speed while turning horizontally and vertically to ensure even distribution.

Since the birth of the concept of VHP sterilization, this technology has developed from focusing on small closed systems such as isolators, transfer cabins, etc. to larger spaces such as rooms, suites, and even entire buildings. However, as the scale-up of sterilization volumes also presents challenges with its unique setup, a unique design of the building system is required for VHP sterilization. The resulting authentication, health and safety issues all need to be considered. VHP has been widely used in freeze dryers, isolators, rooms, RABS, filling lines and in different configurations of operations/production.

At present, the most common method is to use steam sterilization. The operation is to increase the temperature and humidity inside the freeze dryer by 121°C and 25PSI and keep it for a certain time and cycle. Although the use of steam sterilization is no problem for pharmaceutical companies, it is significant. This adds to the installation cost and complexity of the freeze dryer and requires long cycle times. Freeze dryers usually operate under extremely low temperatures and high vacuum conditions, and do not need a pressure-resistant level. In order to meet the requirements of high-pressure sterilization, the cabin must be used as a pressure vessel, which significantly increases production costs, often reaching double times the extent, meanwhile, requiring auxiliary steam generators and stainless steel piping systems. Because of the significant increase in the cost of steam sterilization, and the existing freeze dryer cannot be transformed into a steam sterilization type, the use of hydrogen peroxide vapor has become another feasible solution.

The initial hydrogen peroxide vapor disinfection focuses on controlling the VHP concentration throughout the process to not exceed the dew point. For example, the method adopted is to use a drying cylinder to eliminate the humidity in the environment before and during the cycle. This method is suitable for It regulates the environmental conditions of small volumes, but there are problems in spaces of tens or hundreds of cubic meters. Needless to say, it limits the application of VHP in large-volume spaces. Subsequent studies have proven that this method is less effective in killing bacteria than when the target space reaches the dew point. It was found that when the concentration of the target environment reaches its peak during the cycle, an invisible layer will form on the surface of all exposed objects. The deposit, under the microscope, is a condensation film of about 2 μm, which produces a more effective killing effect. Once the hydrogen peroxide molecule touches the surface of the object, it will immediately oxidize and form free radicals to attack microorganisms to achieve a high level of disinfection and sterilization, and it is broad-spectrum effective against bacteria, spores, fungi, molds, and viruses. Therefore, the removal of any restrictions on environmental conditions is essential when successfully decontaminating large-area spaces of which nearly 99,100 m3 have been successful. Later, inspired by the direct injection of the sterilization room (the nozzle is generally placed in the center of the room, and the VHP is directly injected into the environment, that is, no need to pass through the filter), the sterilization treatment of the isolator also has a new development, Hydrogen peroxide vapor is directly injected into the work area, rather than through high-efficiency filtration of the supply and exhaust air, coupled with the removal of restrictions on environmental conditions, cycle times within 1 h are possible and in some cases significantly Improved workflow.

Validation and confirmation of successful disinfection are very important, regardless of the scope of application, the use of hydrogen peroxide vapor technology requires consideration of environment-specific factors such as size, structure, and environmental conditions. These elements affect the performance of the entire disinfection cycle and can help define a specific set of parameters for successful disinfection. While theoretical analysis can lead to a reasonable starting parameter, it must be determined practically by running an iterative development process. Once this set of parameters has been completed - and validated - within the safety framework, a performance verification cycle is run leading to the final verification cycle.

Verification of VHP concentration and distribution during sterilization

The problem of uniform distribution is sometimes a false problem because it is impossible to achieve a true uniform distribution, just like formaldehyde sterilization, no one knows whether formaldehyde is uniformly distributed. Generally considered the worst point to use BI for biological challenges. Just like the bacteria or suspended particle test, consider the appropriate location test.

The microbial challenge experiment on the application of hydrogen peroxide uses Geobacillus stearothermophilus[3], which requires a 6-log kill rate in an aseptic operating environment. This microorganism is also widely recognized as a sterilizing agent for steam autoclaving. Proof of process and effect is under challenge. The advanced control system built into the hydrogen peroxide vapor generator is different from various uncertainties in the use of formaldehyde. A continuous feedback loop process with full visibility through multiple sensors, also including the ability to interrupt, modify, or abort operations if necessary. At the same time, the highly automated production process control complies with the requirements of Chapter 11 of CFR and meets the requirements of the current good manufacturing practice GMP.

In summary, hydrogen peroxide vapor is obviously not only a substitute for formaldehyde, because of its spectral sterilization efficiency, complete safety management characteristics, and perfect process control, but the whole process can also be verified and supported. And in the field of biotechnology, many new applications can be developed. The advantage of this technology is that it not only kills microorganisms in the area during the sterilization process, but it can purify, restore and upgrade the entire production and processing environment to standard working conditions, whether in daily or emergency situations, peroxidation Hydrogen vapor forms a new benchmark process.

(1) No effect on various metal materials;

(2) It has no effect on various materials of the building itself, such as fireproof probes, sockets, etc.;

(3) It has no effect on office supplies such as CDs, fax machines, mobile phones, etc.;

That is to say: it can be well-compatible with these devices and materials.

Wuxi Lenge Purification Equipments Co., Ltd. is a professional manufacturer of purification equipment, our products are suitable for pharmaceuticals, laboratories, food and beverage, electronics, etc. We also have stainless steel furniture. If you are interested in purification equipment and stainless steel furniture, please get in touch with us! You can contact us at 86-510-85189266. Or send an email to export@wxljjh.com.